How is the development of China’s connector market? Here is the answer with the data and facts

Home/FAQ/PRODUCT FAQ/How is the development of China’s connector market? Here is the answer with the data and facts
Previous Next

How is the development of China’s connector market? Here is the answer with the data and facts

How is the development of China’s connector market?

In 2017, connector manufacturers in the United States continued to maintain the top four, but the number of top 10 Asian manufacturers has increased significantly.

China’s Foxconn and Luxshare are in the top 10 ranks. The ranking is as follows:

China’s connector industry is growing faster than the world

it has become the world’s largest connector consumer market, 20% more than the second European market.

At present, the development of connectors in China is in the transition period from production to creation. The demand for high-end connectors, especially in the fields of automobile, telecommunications and data communication, computer and peripheral equipment, industry, military aviation, etc., has led to a rapid growth of the high-end connector market.

With the internationally renowned connector companies represented by Tyco Electronics (TE), Molex, etc., the production bases have been transferred to China, and the manufacturing level of connectors in China has rapidly increased, plus China’s aerospace, aviation, electronics, and ships. The demand and investment of high-end connectors in the military industry such as ships are increasing. The connector technology of various downstream applications in domestic enterprises is close to or even reaching the international top level. It is represented by Lixun Precision, AVIC Optoelectronics, Derun Electronics, and Electrical Connection Technology. China’s high-end connector companies are growing rapidly, accelerating the domestic replacement of high-end connectors.

However, emerging industries and high-tech products still maintain high profit levels, with the rise of smart manufacturing, industry 4.0, military-civilian integration, Internet of Things, Internet of Vehicles, 5G communications and other emerging fields and the high data era. For technology products, the requirements for connectors are increasing. These connector products and enterprises will still maintain good profit levels in the future.

The connector industry represented by listed companies is in sync with the development of China’s electronic information industry. The profit of the whole industry has grown steadily, and some corporate profits have declined, and some have grown substantially.

The gross profit margin of the connector industry varies according to the product differences of each company. The overall trend is stable. At the same time, the Chinese connector industry has attached great importance to research and development of new technologies, new products, new materials, new processes and increased R&D investment in recent years. The number of patents and intellectual property products is increasing, and the gross profit margin of these products is much higher than traditional low-end products. It contributes a lot to the profit level of connector companies. In the future, the profit level of Chinese connector companies will be stable overall.

During the “Thirteenth Five-Year Plan” period, the state will continue to increase support for the aerospace industry. With the advancing of manned spaceflight projects and lunar exploration projects, the Beidou navigation industry is booming and it is expected to launch hundreds of hundred stars. The current shortage of national defense construction in China determines that the future investment in defense construction will continue to maintain high growth.

It is expected that countries in the fields of aerospace, military electronics and other fields will be expected to achieve a compound growth of 20% in the next 5 to 10 years. At present, China is accelerating the modernization of the military and the construction of information technology. The rapid growth of new equipment demand will make the market for military connectors expand rapidly.

Smart products are thinner, higher performance, more features, and longer battery life, which will require connectors with smaller sizes, wider operating frequencies, and higher transmission speeds. In recent years, the fields of wearable devices and the Internet of Things have developed rapidly, and new requirements have been placed on the connector industry, especially for the FPC series.

In the context of the pursuit of light, thin, short and small designs for electronic products, the FPC market has broad prospects. In recent years, various high-tech electronic products have been used in large quantities, such as digital cameras, digital cameras, and car satellites. Devices, LCD TVs, notebook computers, etc., especially in the field of communication such as mobile phones, are particularly widely used.

With the global restrictions on fuel vehicles, the development of new energy vehicles is very fast. Especially in China, becoming a new energy vehicle power has become a national strategy. The implementation of Industry 4.0 and “Made in China 2025” requires higher requirements and greater demand for industrial connectors. The automotive and smart manufacturing connector market will be the largest application mayor for connectors worldwide.

Compared with the smart phone industry chain, the automotive industry chain is more closed, including TE, Molex and other occupying the leading position of automotive connectors. Domestic connector manufacturers are limited in intellectual property rights and patent ownership, and it is relatively difficult to seize the market. However, the prospects for automotive and industrial connectors are huge, and with the trend of domestic substitution, the opportunity for the Chinese connector industry is even greater.

The demand for the connector market is still growing. Due to the improvement of China’s intelligent manufacturing and the complete supply chain, the overall demand for the Chinese connector market is growing rapidly, leading the rest of the world. This trend is very conducive to China’s connector companies to become bigger and stronger, improve technology research and development and manufacturing levels. This is extremely important for the full realization of the goal of “Made in China 2025”, the enhancement of China’s scientific and technological level and the healthy development of the country’s economy. 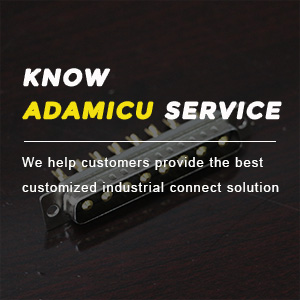